This document is a guide to deploying, administering, and maintaining BookKeeper. It also discusses best practices and common problems.

A typical BookKeeper installation consists of an ensemble of bookies and a ZooKeeper quorum. The exact number of bookies depends on the quorum mode that you choose, desired throughput, and the number of clients using the installation simultaneously.

The minimum number of bookies depends on the type of installation:

There is no upper limit on the number of bookies that you can run in a single ensemble.

To achieve optimal performance, BookKeeper requires each server to have at least two disks. It’s possible to run a bookie with a single disk but performance will be significantly degraded.

You can run bookies either in the foreground or in the background, using nohup. You can also run local bookies for development purposes.

To start a bookie in the foreground, use the bookie command of the bookkeeper CLI tool:

To start a bookie in the background, use the bookkeeper-daemon.sh script and run start bookie:

The instructions above showed you how to run bookies intended for production use. If you’d like to experiment with ensembles of bookies locally, you can use the localbookie command of the bookkeeper CLI tool and specify the number of bookies you’d like to run.

This would spin up a local ensemble of 6 bookies:

When you run a local bookie ensemble, all bookies run in a single JVM process.

There’s a wide variety of parameters that you can set in the bookie configuration file in bookkeeper-server/conf/bk_server.conf of your BookKeeper installation. A full listing can be found in Bookie configuration.

Some of the more important parameters to be aware of:

Ideally, the directories specified journalDirectory and ledgerDirectories should be on difference devices.

To enable logging for a bookie, create a log4j.properties file and point the BOOKIE_LOG_CONF environment variable to the configuration file. Here’s an example:

BookKeeper provides a utility for upgrading the filesystem. You can perform an upgrade using the upgrade command of the bookkeeper CLI tool. When running bookkeeper upgrade you need to specify one of three flags:

A standard upgrade pattern is to run an upgrade…

…and then restart the server:

If something has gone wrong, you can always perform a rollback:

You can format bookie metadata in ZooKeeper using the metaformat command of the BookKeeper shell.

You can format the local filesystem data on a bookie using the bookieformat command on each bookie. Here’s an example:

The -force and -nonInteractive flags are also available for the bookieformat command.

For a guide to AutoRecovery in BookKeeper, see this doc.

Accidentally replacing disks or removing directories can cause a bookie to fail while trying to read a ledger fragment that, according to the ledger metadata, exists on the bookie. For this reason, when a bookie is started for the first time, its disk configuration is fixed for the lifetime of that bookie. Any change to its disk configuration, such as a crashed disk or an accidental configuration change, will result in the bookie being unable to start. That will throw an error like this: 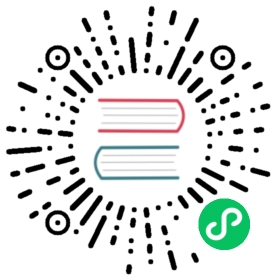